From Preveza to Palermo via the Aeolean Islands 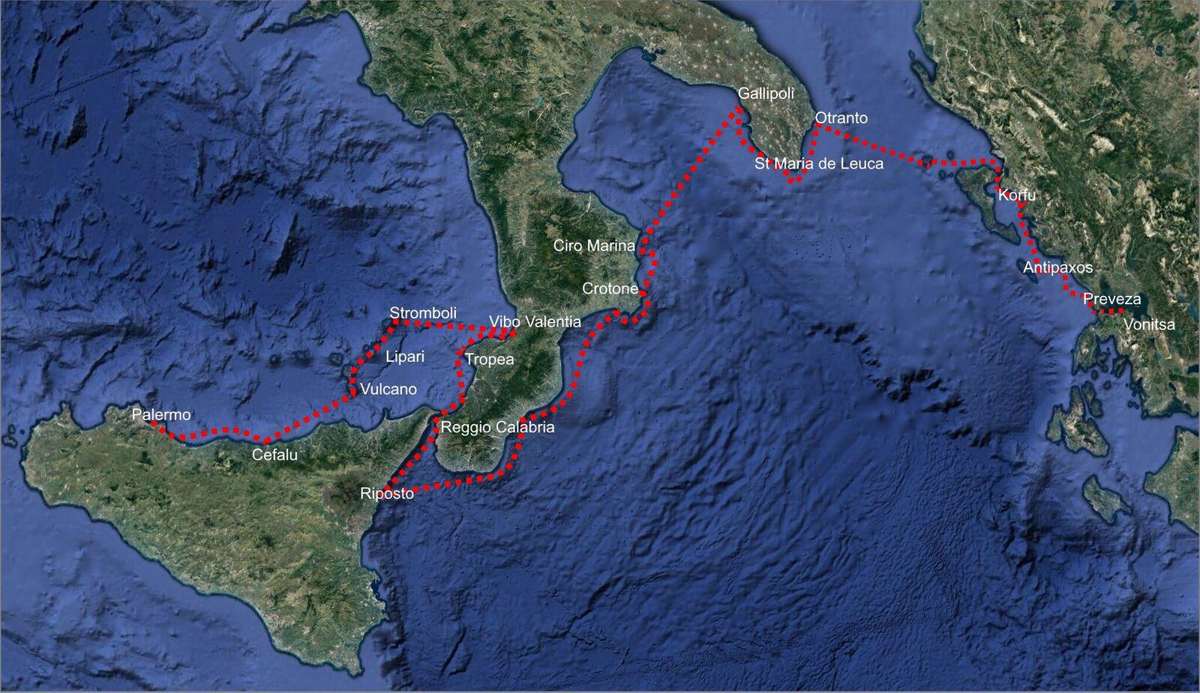 From Preveza to Orthoni:
After 7 years we have finally decided that it is time to (albeit reluctantly and slowly) turn our bow in westerly and later northerly directions. In the early spring however, we explored parts of the Ionian that we haden't visited before. Ten wonderful days in the fascinating indland sea of Amvrakikos Kolpos, where we experienced the celebration of Sct.Georges day (Sct.George is also the patron saint of horses) se the pictures below and a video from the event (opens in new window on Danish language webpages). But also a visit at the river Acheron, the ancient river Styx and gateway to the underworld (watch video, opens in new window on Danish Webpages) was a highlight not to bee missed.

Pictures from the early season in the Ionian:

Otranto to Vibo Valentia
Via Paxos, Corfu and the small island of Othonoi to Otranto, Santa Maria de Leuca and Galippoli in Puglia. Across Golfo di Taranto to Ciro Marina. A place rarely visited and without facilities for Yachts, but nice people and fre of charge (and in Ciro they produce an excellent vin rosé).  Further in Calabria to Crotone visiting 'old' friends Pino and Helena, and Le Castella a small hidden gem. Via Riposto and Reggio between Scylla and Charybdis through the the Strait of Messina and back to northern Calabria leaving Troldand in Vibo Valentia in July and August.

Vibo via Aeolian islands to Palermo
Back in September. Visiting four of the Aeolian Islands (Stromboli, Panarea, Lipari and Vulcano). Theese Islands are rightly famous for their geology and an extremely popular cruising (and charter) destination. We did find the islands somewhat over-exploited by tourism though, each island its speciality: Stromboli being 'Trekker Island'  Panarea: 'Island of the rich and beautiful' , Vulcano 'Health and spa Island with a mud-bath and a little Yoga thrown in for good mesure'. When we were there however, weather was pretty unsetteld (we had two days of outright gale) and as safe moorings are scarce we were not tempted to stay to long and may be this has influenced our general opinion of the Islands. A small article written for the SOA Magazine no. 106 may be downloaded by following the link: Tracing Odysseus (pdf). Finally along the northern Sicilian coast to Palermo, our winter heaven.